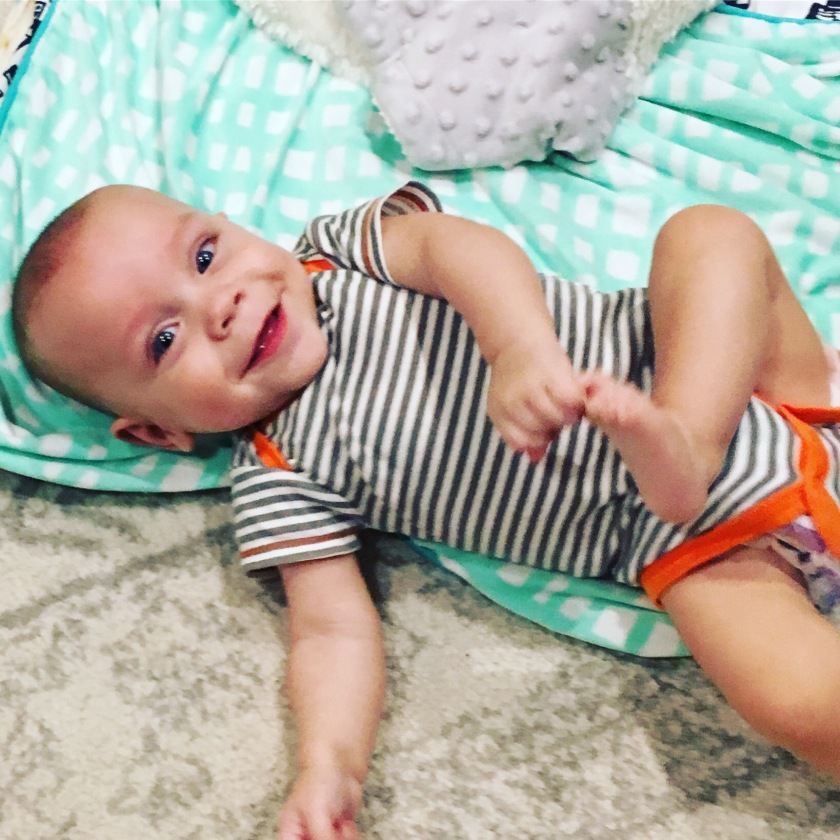 When the doctors at Children’s Healthcare of Atlanta started to discuss the possibility that Graham’s seizures and brain atrophy were caused by a mitochondrial disease, we were scared. We didn’t know much about mito, but from what we heard, the prognosis was grim. As more symptoms appeared and with a simple blood test, it was confirmed that Graham had Alpers’ disease, an incurable and deadly mito disorder. During this process, Brandon and I turned everything over to God. We consistently prayed and through His word, He spoke to us. “Everything that was written in the past was written to teach us. The Scriptures give us patience and encouragement so that we can have hope.” Romans 15:4 Hope is an incredible word. It turns darkness into light. It turns the impossible into possibilities. Graham’s disease is hopeless. It is incurable. But if you turn to the scriptures, if you have faith, this can change.

When I discuss Graham’s illness with others, the first question people ask is, “What is mitochondria?” I became accustomed to answering this question, along with a short explanation of Graham’s disease, and the importance of mitochondria to make sense of it all. When I returned to work, I decided it would be best to talk with my students about Graham and our experience. I teach high school students and they have been invested in Graham and his story since day one. I knew this would be a sensitive topic, but it would also be a teachable moment to share with them about life, sadness, joy, grief, and more importantly – an opportunity to educate them about rare diseases like mitochondrial disorders. I planned to start the conversation by asking them if they knew anything about mitochondria and I expected them respond to my question with, “Mito…what?” But they surprised me by actually answering my question and they even taught me about mitochondria. They told me that mitochondria are found in almost every cell of the body. They also knew that mitochondria are the “powerhouse of the cell”, which is also true. And they knew that mitochondria is essential to sustain life. I was amazed and encouraged by what they already knew! I also doubted my own intelligence because when the doctors explained mitochondria to me at the hospital, I felt like I was learning a foreign language, which I shared with my students and we had a good laugh. In all seriousness though, I started to wonder what happened. Why did I forget a term that one student described as “basic biology”? I think I forgot about it, along with everyone else who asks me about it, because it didn’t mean much to us at the time. Mitochondria was another term highlighted in our textbook, another definition we memorized and purged after a test – unless you loved science and wanted to study biology in college, you are the exception. But that wasn’t me and I forgot all about mitochondria. At the time it didn’t mean much to me, but now it does. Now, I will never forget it. Graham taught me that mitochondria isn’t just a term from a textbook, it impacts us every day.

Graham’s mitochondrial disease is called Alpers-Huttenlocher syndrome. This particular disorder is caused by genetic mutations in the POLG gene. The POLG gene is super important because it provides instructions to your cells to produce new DNA. Basically, it is the brains of your mitochondria. Each mitochondria contains a small amount of DNA for normal functions, and then it will replicate and create more cells. This is essential in creating energy. Well this disorder – Alpers’ disease – caused Graham’s mitochondria DNA to deplete, instead of replicate. And since his mitochondria could not duplicate, Graham’s body was essentially running out of energy. People often ask us if we had any idea he was sick, but we did not. We were blindsided by the onset of his disease. Like most mitochondrial diseases, Alpers’ is difficult to diagnose because symptoms are similar to other disorders. In Graham’s case, he had low muscle tone and GI issues, which are symptoms of Alpers’ disease, but these are also common in preemies, and since Graham was born at 24 weeks, we assumed it was related to his prematurity. When he started to have seizures, another symptom of Alpers’, doctors investigated epilepsy and neurological disorders, not mitochondrial disease because his symptoms did not scream mitochondrial disease. And this is very common for those with a mitochondrial disease. As I learn more about this disease, I realize how important is to educate others. With awareness and understanding, I hope mito disease is a term people recognize like cancer, heart disease, or diabetes. I hope it becomes easier for doctors to identify and treat. But in the meantime, I would simply encourage us to prevent it through genetic screening.

Mitochondrial diseases like Alpers’ are inherited. Graham received a defected POLG gene from Brandon and a different defected POLG gene from me. We are both carriers. The chance of us having another child with Alpers’ is 25%. What people do not realize is that everyone is a carrier for genetic disorders. Statistically, most individuals are carriers of 3 to 4 diseases. The odds of you and your partner carrying the same genetic disease is rare, but it is possible, as we have witnessed with Graham and other couples I have met along the way. There are tests available to screen for some of these diseases which I would encourage everyone to do! Tell your friends, your children, even your grandchildren about this option. I think if more couples knew how easy it was to get screened, they would do it to prevent any heartache like we experienced. Most often it is covered by insurance, and if isn’t covered, it is rather affordable. We negotiated our price with GeneVu who I highly recommend. And if you decide to get tested and find out that you and your partner are carriers of the same rare disease, it isn’t the end of the world. Believe it or not, there are other options like adoption or choosing IVF to screen embryos prior to implantation. It is incredible what possibilities exist! We love Graham and will forever cherish our memories together, but if I can spare one family the heartbreak of losing a child to an incurable, genetic disease, I would.

Revelation 21:4, “He will wipe every tear from their eyes, and there will be no more death or sorrow or crying or pain. All these things are gone forever.” God promises a better world for us, and I know Graham is there waiting to see us again. In the meantime, we will continue on our journey, sharing our story with others. This is our experience with a rare disease and I hope my voice can lead to more conversations and greater awareness. This is our hope.

I am a mom who lost my son to an awful, incurable mitochondrial disorder - Alpers' disease. This blog is my attempt to spread awareness about rare diseases and to encourage hope in the midst of it all.